Since 1883 the Hamley family has faithfully delivered quality western craftsmanship to working cowboys, rodeo bronc busters and horseback riding enthusiasts of all kinds.

In 1905, Hamley & Co. found a permanent home in Pendleton, Oregon and set up shop in the same building where it still resides today.

J.J. and Henry Hamley, sons of the original craftsman, continued the tradition of making legendary saddles, including their own innovative designs and custom work with bits and spurs. 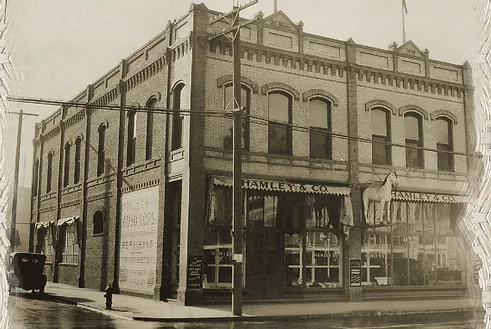 The history of the Hamley & Co. Western Store began in Cornwall, England, where the trade of saddle and leather craftsmanship was passed down from generation to generation. The Hamley tradition found its way to America and in 1883, J.J. and Henry Hamley established Hamley & Co. In 1905, Hamley & Co. found a permanent home in Pendleton, Oregon and set up shop in the same building that exists today.

The business soon developed a reputation throughout the West as the maker of the finest saddles a man could ride. J.J. Hamley was instrumental in organizing the first Pendleton Round-Up and served as a director for many years. Over the years, Hamley & Co. has provided hundreds of Round-Up trophy saddles and 58 World Champions have ridden Hamley saddles.

The Hamley building is registered as a historical site, whose owners take pride in preserving the Hamley name and legacy for the coming generations who will walk through its doors.

The second level at the Hamley’s store is an art gallery, featuring paintings and bronze sculptures by both local and national artists, depicting the western way of life.

Since 1883, the Hamley name has been synonymous with quality.

Our mission is to carry on this proud tradition by providing excellent food and outstanding service. The concept of Hamley Steakhouse took root in early 2006 and soon became a reality, finding its home in a prominent and historical location next to the Hamley Western Store. A rich and unique list of businesses occupied this site dating back to the Umatilla County Courthouse, circa 1869. During construction, every detail was attended to in bringing to life an authentic turn-of-the-century look and feel. Dedicated local contractors and craftsmen worked tirelessly to complete the construction in an amazing nine months. Hamley Steakhouse opened to rave reviews in June 2007.

Located in the heart of downtown Pendleton, home to the historic Pendleton Round-Up and the Confederated Tribes of the Umatilla Indian Reservation,  Hamley Steakhouse is a visual narrative of the past. It stands in tribute to the town’s notable past and colorful lifestyle as every square foot has been meticulously designed to embody the American Old West.

Visitors are often taken back in time as they experience the late eighteenth-century design and top-of-the-line craftsmanship. Hamley Western Store and Steakhouse are truly an experience you’ll never forget!

Some of the highlights are:

The history of the Old West was built upon the cowboy-versus-Indian myth. In truth, cowboys and Indians got along quite well, trading and living harmoniously. The Hamley brand flourished over the years, delivering on the original promise of quality and excellence. It is with that understanding and preservation that the Confederated Tribes of the Umatilla Indian Reservation (CTUIR) purchased the historic brand and Hamley properties–what better pairing could exist?

In August of 2019, the CTUIR became owners of Hamley’s Western Store, Steakhouse, and Café, including the historical building in which they operate. “Lock, stock and barrel,” as they say out West. It’s a lifetime of historic tradition that will continue as CTUIR become stewards of the legend’s future.

Day-to-day operations of Hamley & Co. are managed by Wildhorse Resort & Casino, bringing to the table 25 years of successful business experience in food and beverage, retail, entertainment, and of course legendary hospitality.

The Cayuse, Umatilla and Walla Walla people make up the Confederated Tribes of the Umatilla Indian Reservation. Since time immemorial, we have lived on the Columbia River Plateau. Specifically, our homeland is the area now known as northeastern Oregon and southeastern Washington.

Our three tribes were brought together on the Umatilla Indian Reservation, established by a Treaty with the US Government in 1855. We were united as a single tribal government in 1949 when our leaders adopted our Constitution and By-laws.

From the very beginning in early 1900, the Confederated Tribes of the Umatilla Reservation, as well as those from surrounding tribes, shopped for clothing, tack and saddles at the Hamley & Co. store. CTUIR members developed great respect for the Hamley family for their support of tribal events over the decades and now take pride in keeping this western icon alive for generations to come. Then, as it is today, Tribal members, cowboys and locals grew up knowing that visiting the Hamley store is considered a special event. The quality and tradition the Hamley name was worth the trip. Today, the Hamley & Co. business continues to craft exquisite merchandise and saddles. It exists parallel to a modern-day world, where we are reminded of the value of handmade quality, family traditions and a vision that drives your passion. J.J. Hamley is quoted as saying, “Quality articles are made for men who are tired of the extravagance of buying cheap things.” Today, through our ownership, we are keeping the commitment of skilled craftsmanship a Hamley tradition.

This is the story of the Hamley name and the Confederated Tribes of the Umatilla Indian Reservation.

We hope you enjoy your visit!

For more information about the CTUIR, visit ctuir.org

Copyright © 2023 Hamley™.
Owned and Operated by CTUIR. All rights reserved.